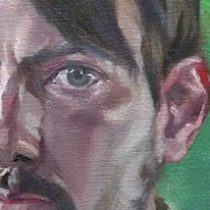 Asa Medhurst is a contemporary figurative artist working in oils and charcoal.

“I love Renaissance style; it’s love affair with the romantic, symbolic and concept of idealized beauty. But I’m equally excited by more contemporary painters, the aesthetics of impressionism, expressionism and realism in conveying the beauty of the everyday.”

“When painting a portrait, I initially get to know my sitters through sketches and conversation. I pose them with objects and artifacts relevant to their lives and practices so the viewer is able to ‘read’ them, as in Renaissance portraiture. Like Holbein, I look for objects, setting or composition that have deeper symbolic meaning than outward appearance may suggest.”

“Similarly, when working on a still life I try to balance an aesthetic narrative with a deeper symbolic meaning.”

Asa graduated from the Kent Institute of Art & Design in 1995 and has since gone on to study at The Royal Drawing School, Art academy and Lavender Hill Studios.

Asa has shown in the Royal Society of Portrait Painters annual exhibition and been short-listed for entry in the BP Portrait Award. Asa lives and works in South London.

‘Immigrants’ - Mansions of the Moon #drawing

Hi! On the easel today. Sooo nice to be working in

‘Reshuffle’ - Mansions of the Moon #drawing #

‘Selfie I’ - Mansions of the Moon #drawing #d

Portrait of Adele in Charcoal. I created this por